Dräll pulleys and opposite tie-ups, again


So is it possible to use dräll pulleys for other than two-block "opposite" weaves?

To refresh your memory, here is one illustration from my web page on dräll pulleys, with 6 shafts mounted: 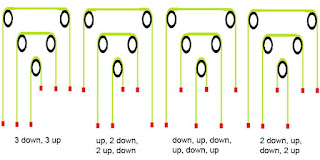 The question came up in another context, and I tried to construct some examples.
Starting with a 2/2 twill - this is one "normal" way to thread and tie it up: 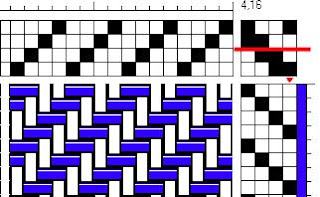 (The red line represents the position of the dräll pulley, the line which makes the mirror for the opposite tieup)
As can be seen, that tieup will not work. Starting from the left, the first column will work. The second will not, as shafts 1 and 4 both go up (in the Swe notation), while shafts 2 and 3 both go down). Third column is "opposite", fourth is not.

So what can be done? We need to do something to both column 2 and 4, trying to get them "opposite". One way is this: 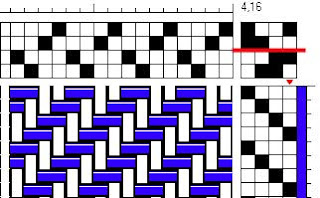 By changing the threading, we have also changed the tieup, which is now compatible with the dräll pulleys: it is now "opposite". (Note that this also prevents a true tabby, as the threading no longer follows the odd-even rule).

Next try, an 8-shaft even tieup (by "even" I mean that all sheds have half of the shafts up, half down, in various combinations - see a discussion on "even" weaves here) 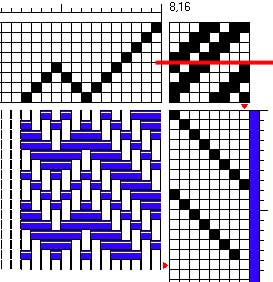 Started with the leftmost column - and got the fourth correct as a bonus. 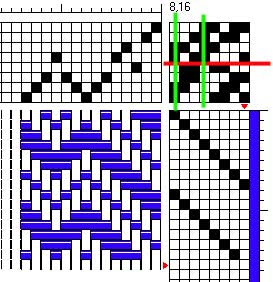 However much I tried, I could not fix more than 4 columns/treadles. 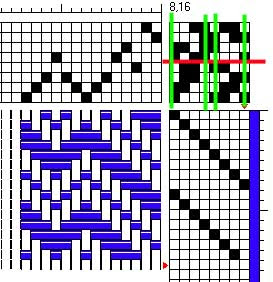 Maybe I could modify the pattern some, and still like the result? So I marked all the ties that conformed with the rule: 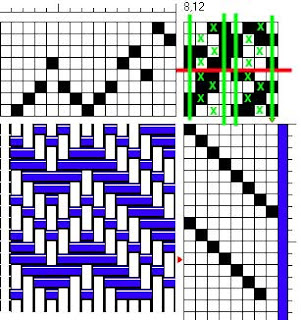 Started to take out/put in ties in the possible positions... this was the best result I could come up with: 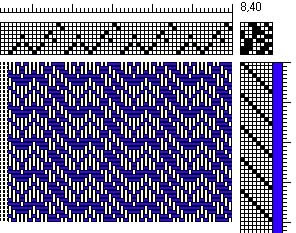 Would I weave this? No, but then, I am on a countermarche...
Compare it to my starting point: 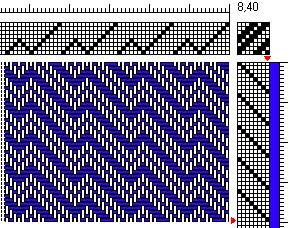 I tried various other even tieups with much the same results, and in the end I decided that there is a good reason the pulleys are called "dräll" pulleys: they are excellent for two-block "opposite" structures! For all the others, there are countermarche looms...

Posted by Kerstin på Spinnhuset at 17:19

Perfect timing as we were just discussing this in Cape Breton. :)